Bees and wasps are members of the order of insects called Hymenoptera. The Greek origin of the word hymen means membrane and pteron means wing. They are the largest order of insects and stinging incidents send nearly half a million people to the emergency room annually. While bees and wasps are commonly grouped together, they are physically different. Bees are covered in hair, round in shape, and have smooth, flat and wide legs. Wasps are slim with a pointed lower belly and have more round and waxy legs.

Their stages of life are the same and consist of: 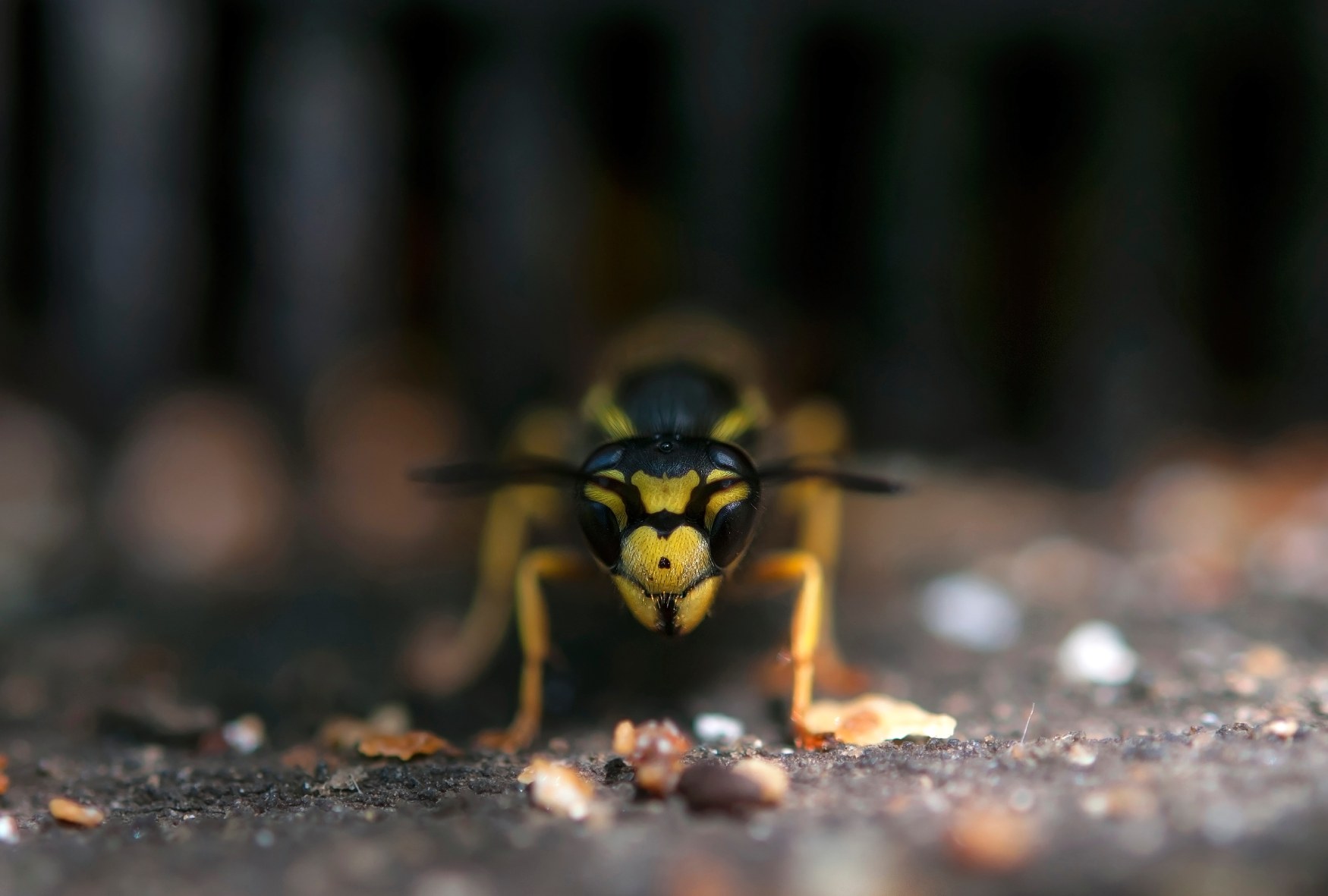 As for their social structures, bees and wasps are broken into two groups: social and solitary.

Social bees and wasps follow a eusocial class system. Within the classes, there are queens, male drones, and workers. Queens mate with the male drones and can lay over 2000 eggs in one day. The drones serve the purpose of mating and often fly around to other hives to mate with multiple queens. Workers are responsible for maintaining the hive, caring for the young, and feeding the colony.

Social bees produce honey and design their insulated hives to be able to withstand the winter months of hibernation. Wasps, on the other hand, lack well-insulated hives due to their paper-like structure and die as soon as temperatures begin to plummet. Only the queen wasp will survive until the next season by burrowing and hibernating alone.

Solitary bees do not have hives. Instead, they survive solely on pollen and will sting when provoked. Social female bees are fertile and make nests either in a hole or in mud. Once they lay their eggs, they create small cells within their nest to store each egg in. The bee packs each cell with pollen as a food source for the egg before sealing it up with mud. The bee then leaves the eggs behind. While encased in it’s cell, the egg hatches into the larva stage, develops into the pupa stage, and ultimately transitions into an adult. The young bee stays safely in its cell with a food source until Spring when the weather becomes warm enough for it to finally emerge.

Solitary wasps are fierce and carnivorous. They rarely attack humans unless they feel threatened and choose to feed on pests such as spiders, flies, and other garden pests. They attack their prey by paralyzing them with their venom and will then feed both themselves and their young.


Why Do They Sting?

Bees and wasps sting as a natural defense mechanism against predators and are only triggered to do so if they feel threatened. The main difference between the stinging of a bee and a wasp is that a bee can only sting once, but wasps have the ability to sting multiple times. Bees leave their stingers behind in their victim along with a venom sac. A wasp will still have its stinger attached after stinging.

Individuals with allergies to Hymenoptera insect venom can have severe reactions ranging in severity from a swollen injection site to anaphylaxis. Anaphylaxis is very serious requiring an EpiPen and medical attention.


What Attracts Stinging Insects to Your home?

Wasps are far less particular with the location of their hives in comparison to bees due to their life span only lasting for one season. They do not need to focus on a sheltered or insulated home for winter months. Wasps merely seek out flat surfaces such as the underside of an overhang or fence post where they can construct their hanging nest.

Bees take great care in selecting the right home for their hive. They will seek out any opening, hole, or sheltered area in a tree or side of a home to potentially protect their hive from outside elements.

As for the solitary varieties, solitary bees are primarily attracted to flowers, sweet floral scents, and bright colors resembling flowers. Solitary wasps are drawn to areas with large populations of other insects to eat such as gardens. They will also seek out sugary substances from fallen fruit and leftover food.

There are over 20,000 species of bees and 800 species of wasps in the world. Homeowners are most likely to encounter the following:

European Honey Bees are the most common variety of bees and are often kept by beekeepers. They are the typical fuzzy, black and yellow striped bee and are considered vital to the ecosystem due to their important role in pollination.

Africanized Honey Bees are considered to be the most dangerous of all the species of bees. They are known for their aggression and eagerness to defend their hive. They will swarm potential threats and have been responsible for killing over 1000 people.

European Hornets are physically the largest wasp species and typically only sting when provoked. Due to their size, these social wasps are known for attacking larger insects such as beetles, mantises, and spiders. They are also drawn to sugar and will seek out fruit trees.

Blackjackets differ from other social wasps in that they have the ability to not only sting, but also squirt and spray venom. Similar to other wasps, they are carnivorous and eat other insects. They are also drawn to fruit and other sugary substances.


How to Get Rid of Stinging Insects

Remedies for bee and wasp removal include:

Bees and wasps have an aversion to the scent and texture of dryer sheets. Homeowners experiencing bee and wasp infestations can hang dryer sheets around to deter them from coming near. This method won’t kill them, but it can keep them away from specific areas particularly an outdoor sitting area or door frame.

Vinegar is considered poisonous to both bees and wasps. For this method to be effective, try mixing equal parts apple cider vinegar and sugar and then placing the mixture near a nest. Once exposed to the sweet mixture, they should die almost instantly.

Bees are a crucial part of pollination which is necessary for plants to grow. Many local services exist to capture and relocate hives away from homes. While this is a more time-consuming option, the bees will not be harmed in the process and will be allowed to thrive and continue pollinating in a safer environment.

If you have tried these solutions and you are still unable to get rid of your stinging insect problem, please give the number at the top of the page a call to get connected to a local pest professional in your area. We do not want your house and family to continue dealing with the current pest and want to find ways to protect your home in the future.