Spiders belong to the order Araneae, a Latin word meaning “spider.” These predators are classified as Arachnids, a group of animals that are also part of a bigger group known as arthropods. Being an arthropod, spiders have a tough exoskeleton, segmented bodies and eight legs. They are also characterized by their fangs and spinnerets which allow them to produce silk for spinning intricate webs.

While commonly viewed as harmful, spiders are considered one of the most beneficial forms of pest control. As predators, they are quick to consume pests such as mosquitoes, aphids, flies, and other undesirable insects.

Spiders have three stages of life including: egg, spiderling, and adult. Male spiders tend to be smaller than females and will engage in a courtship ritual before mating to avoid being killed by the female.

Females create an egg sac that can contain over 3000 eggs. Depending on the species of spider, the female will either attach the egg sac to her nest, abandon it in a remote location, or adhere it to her back until the eggs are ready to hatch.

Once hatched, spiderlings may remain in the sac area for a few days but will eventually release a silk strand that can transport them, like a parachute, to a new location to call home. 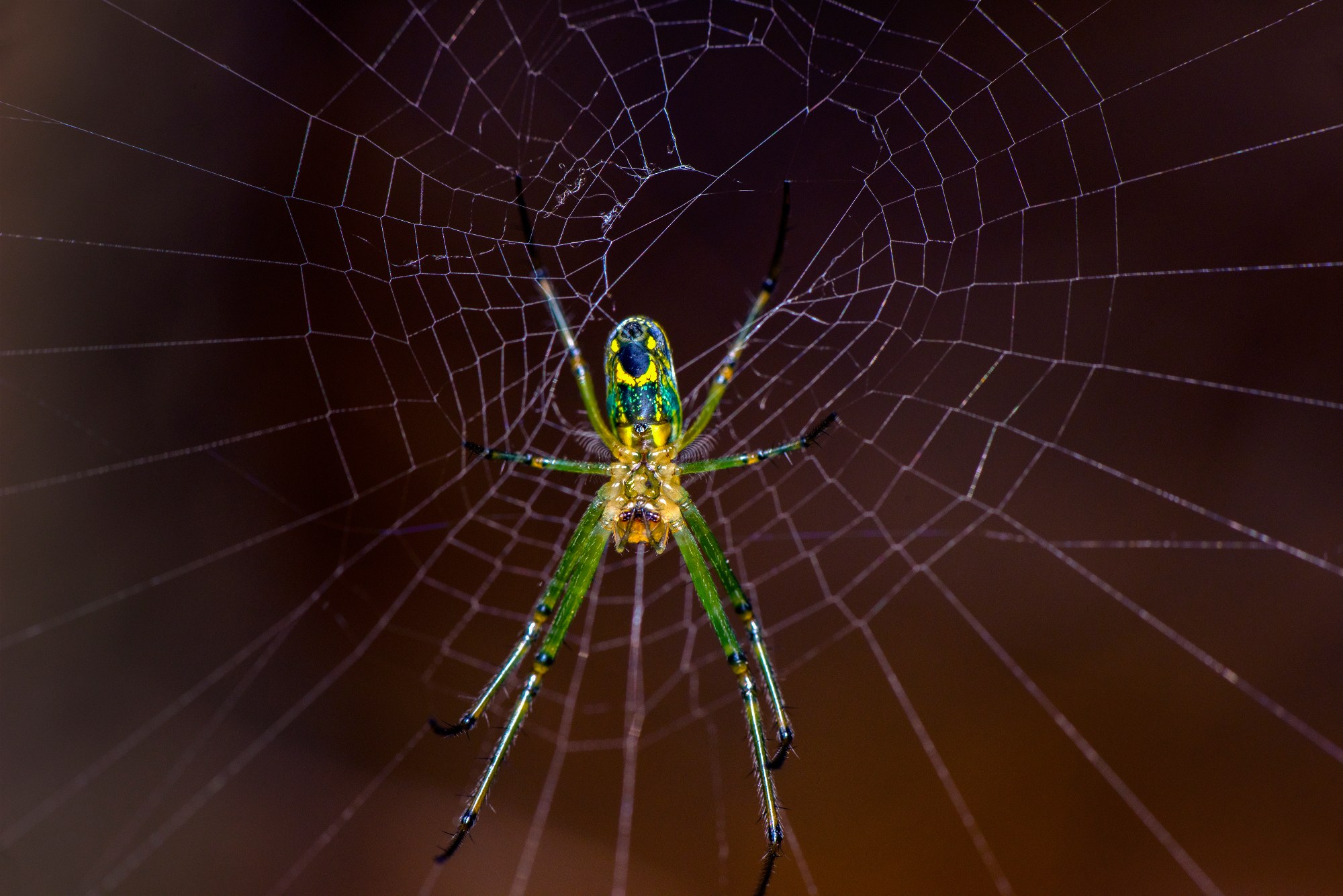 What Attracts Spiders to Your Home?

Spiders choose their dwelling place mostly due to nearby food sources. They are drawn to homes with different insects to eat and dark secluded areas for nesting. During the warmer months, spiders typically choose to remain outdoors. Once the weather cools, spiders will seek shelter inside. They are capable of squeezing through small cracks in foundations, between screens, and between door frames. They are eager to come inside a home if a large population of insects such as fruit flies is discovered.

There are an estimated 45,000 species of spiders in the world. The most common species homeowners will encounter include:

Wolf Spiders are unique in that they do not spin webs to trap their prey. Instead, they are considered active predators who hunt. They are shy by nature and typically avoid human contact. Wolf Spiders can be quite large and are distinguishable by their thick bodies with gray and brown coloring. Rather than leaving their egg sacs, females will carry them on their backs until they hatch. This allows their young to travel with them for several weeks. Wolf Spiders are typically not considered dangerous and usually only the larger wolf spiders are capable of biting.

Black Widows are distinguished by the red, or sometimes orange, hourglass shape on their bellies. They are nocturnal predators that typically live in dark, shaded areas close to the ground. Rarely trafficked areas such as abandoned wood piles or secluded corners in the garage are places Black Widows might be found. Black Widows have a reputation for being dangerous due to their nerve-impairing venom. Their bite can potentially send individuals to the hospital, especially if bitten more than once. Black Widows are usually not aggressive, but will bite when they feel threatened.

Brown Recluses are characterized by their pale, brown color and violin-shaped marking near the base of their head. The name recluse comes from their penchant for spinning their webs in dark, remote, and abandoned areas. Their venom is considered harmful to humans and bite sites will gradually turn into a large blister which can then develop into an ulcer. If bitten by a Recluse, seek medical attention as soon as possible.


How to Get Rid of Spiders?

While spiders are largely beneficial to our environment, many of us do not want them in or near our home. The following is a list of home remedies to rid spiders from you household:

Since spiders seek out discreet areas to call home, remove any scrap wood, or clutter, in and around your home to decrease a potential infestation. If you currently have spider webs visible on the outside of your home you can use a pressure washer to get rid of them and hopefully discourage future web building. To prevent spiders from coming indoors: seal cracks in walls, seal worn caulking, fix tears in screens, and fill in any gaps of door frames. Regularly get rid of excess clutter in basements, attics, and garages to prevent webs from being built.

Peppermint oil is a natural repellant that can be used in areas around your home where spiders have been spotted. A small cloth can be used to apply peppermint oil to the area, or mix the oil with water to spray directly on the surface.

Traps come in many forms, but one of the most effective traps are glue traps. These come in the form of a long, sticky and flat sheet. When spiders walk across the glue trap their legs will adhere to it preventing them from further movement. Place the traps along baseboards, behind furniture, and in any areas where spiders are frequently seen. Glue traps are also effective for mice and cockroaches.

Residual insecticides containing pyrethrins are an effective method for killing spiders and preventing further infestation. Place the residual insecticide as directed in areas highly trafficked by spiders and in potentially discreet areas where you believe them to be nesting. The potency of the insecticide will fade with time and need to be reapplied to continue to be effective.

If you have tried these solutions and you are still unable to get rid of your spider problem, please give the number at the top of the page a call to get connected to a local pest professional in your area. We do not want your house and family to continue dealing with the current pest and want to find ways to protect your home in the future.